Pai Gow poker or double-hand poker is an Americanised version of the classic Pai Gow game played in China for many centuries. The traditional Pai Gow, however, is not a card-based game but is played using 32 dominoes. The poker version of this game is played using a 52 card deck plus a joker. The significant difference between Pai Gow poker vs. regular poker is the playing structure. While most players compete against each other on the casino floor, this game forces players to compete against the dealer. Each table can have multiple players, but their results do not affect the winning or losing of your hand. The game can be very tricky to understand, but our guide will ensure that each step gets thoroughly explained with ease. 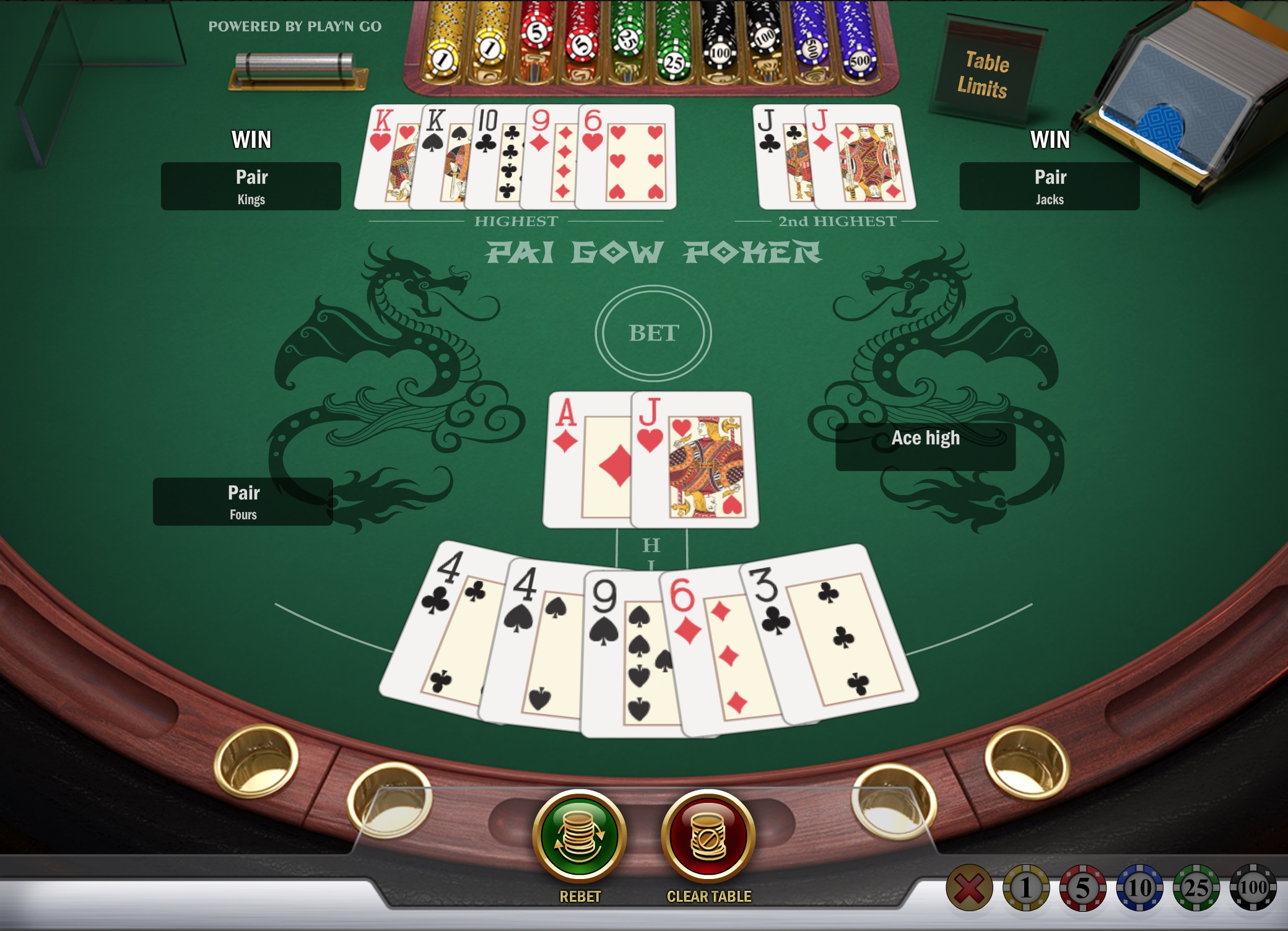 The main objective of each player on the Pai Gow table is to arrange their cards in two hands with the sole purpose of beating the Banker’s hands. Each player will get seven cards, of which they have to make two sets – one of 5 and a pair. The player’s five-card hand and two-card hand should consistently rank more than the Banker’s hand to win the round. If one hand ranks precisely the same as the Banker’s hand, it is considered a tie (copies). The Banker thus wins all copy hands. The winner of the winning hand gets more money while the losing hand loses all the wagered money.

Let’s look at the overview of Pai Gow to grasp the concept of this game with ease. The game involves five steps as follows:

Players can get swept up in the heat of the moment; therefore, it is essential to set up a budget to avoid any significant financial loss. Most seasoned gamblers understand the effects of going overboard. Thus setting a predetermined budget lets you enjoy the game without losing much.

Pai Gow requires players to place their bets inside a neatly marked chip circle on the table. The dealer acknowledges everyone’s bet before moving forward. Once you have decided the amount, place the chips inside the ring. After every player on the table has placed their bet, the dealer shakes the dice cup to find who receives the first card on the table.

The dealer distributes seven cards per player. After looking at these face-down cards, the players need to form two sets – one hand of five cards and another hand of the remaining two cards. This five-card hand is called a rear hand, while the two-card hand is called a front hand. The backhand of five cards should always have the highest poker score than the front hand.

Note: The two-card hand will either constitute a pair or no pair. If your hand makes no pair, then the score is thoroughly based on the numeric value of each card with Aces high.

Once the player has arranged their hand, the dealer does the same thing to compare the hands. The dealer then visits each player and compares the player’s hands with his own. The results of the comparison decide who wins.

Now that you are clear with the basics of the game, you need to learn the poker hand ranking to win the game. Based on these hand rankings, a player can arrange their seven cards to compete against the Banker.

If the set has four Aces and a Joker, then the hand is called a Five Aces hand. For example- A-A-A-A-Joker, here a Joker is considered as an Ace.

The hand is a Royal Flush when a player has an Ace-high five-card hand of the same suit in proper numerical sequence. For example- 10-J-Q-K-A of the same group like hearts, clubs, diamonds, or spades.

A Straight Flush has five cards of an identical suit in an ascending numerical sequence. For example- 4-5-6-7-8 of diamonds are considered a Straight Flush.

A player with any five cards of the same suit can consider the hand a Flush. The numerical sequence does not matter in regular Flush. For example- 2-5-8-7-Q of clubs can be called a Flush hand.

A plain Straight happens when a player has five cards with ascending numerical sequence. Here, the suit of the hand is considered irrelevant. For example- 3 clubs- 4 hearts- 5 hearts – 6 clubs – 7 spades.

You can pair two different sets of two cards that have an equal rank. For example- 7-7 and 4-4 can be called a Two Pair of hands.

One Pair is the most straightforward hand containing two cards of the same rank. For example- 4-4 of any suit can be considered One Pair of hands. 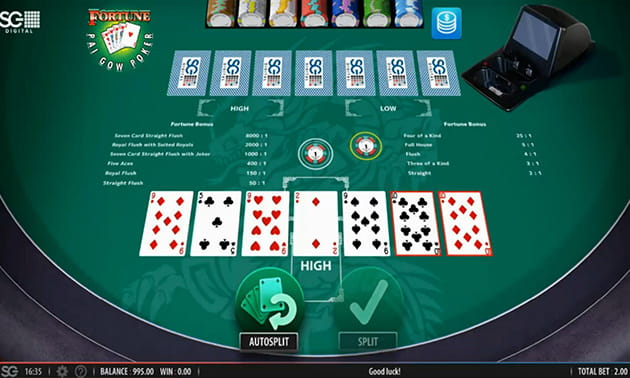 How To Play Pai Gow

As mentioned earlier, Pai Gow is played using a standard 52 cards deck plus a joker. Six players can sit at one table to play at the same time. The Banker will deal the cards, and the remaining players need to make a five-card “high” hand and a two-card “low” hand. Your high hand should always beat your lower hand. For instance, if your little hand is a shining pair of sixes, your high hand should be better than the Pair of sixes. The three possible outcomes from the dealt hands are:

● The Banker wins if both his hands are more significant than the player. The Banker collects the coins from the player once the cards show a lesser denomination.

● The hand is a ‘push’ when a player wins one hand, and the dealer wins another. During a tie, no coin exchange takes place.

A Pai Gow Poker table has an exciting dealing method. The table dealer shuffles the cards and places seven cards face down in front of each player. The dealer also puts a set of seven cards for himself and discards the rest of the four unused cards. All the cards get handed out in a counterclockwise direction. Once the dealer places the new cards into the muck, the players can open their cards for the next step.

The player can create any standard poker hand ranking for the five-card hand, but remember that the two-card hand can only make a high hand or a pair hand. One must not assume that the five-hand card should always outrank the two-card hand. Players can use Joker to complete a Flush or Straight hand. If your set doesn’t make these hands, you can use Joker as an Ace.

Once the players have spent time arranging their cards in two sets, they need to place these two sets at their proper place on the table. The two-card hand gets placed at the top while the five-card hand is placed in the back. If a hand is set inaccurately, then that particular hand is considered foul. The turn gets reset or fortified depending on the casino and house rules. If the casino is the Banker for the game, they must set the cards expertly according to the house rule. But if a player is the Banker, they have the freedom to select the hand according to their will.

Where And How To Use The Joker

Most Pai Gow games played in the casinos have one Joker in their card deck. This Joker is not considered a wild card, but it can be an excellent substitute in three ways:

● It can be regarded as any card to complete a Straight hand.

● It can be considered as any card to complete a Flush hand.

● If the set doesn’t allow making a Straight of Flush hand, it can be used as an Ace.

Pai Gow is considered a relatively fair game compared to other risk-taking and highly challenging games on the casino floor. All the casinos take a tiny commission out of each player’s winnings. So when a player wins a bet of $200, they will receive $190 profit while the remaining goes to the casino. In most Pai Gow games, the casinos charge a 5% commission behind each win. Players should pay attention to this 5% commission before betting on the hands during Pai Gow Poker.

The chances to win in a Pai Gow Poker match are highly dependent on how the cards are dealt since the game doesn’t allow full-fledged betting rounds. However, you have a unique chance of winning the game if you learn to arrange the hands with precision. A few good Pai Gow Poker strategies include:

● Consider playing the highest card with your high hand if you have no Straight, Flush, or Pair in your set. Then place the following two highest cards in your two-card hand.

● Consider splitting the Aces during a top Two-Pair.

● It would help if you tried splitting a Two Pair King when your other Pair is a deuce. You can merge both the strategies and then play the two highest remaining cards in the low hand.

Sometimes, players can face a dilemma after getting a set that can have multiple outcomes. It boils down to personal preference, gut feeling, or deep calculation of your chances during such a time.

The first option has a possible, solid top hand, while the second has a solid low hand. The first hand will surely guarantee a push, but it won’t be the best option if you consider winning. Thus, players might have to mentally plan such moves and combinations before fixing both hands for winning.

Pai Gow is extremely popular amongst many casinos and players alike because of its exciting side bets. These side bets are a sure way of winning more money while adding extra fun to the original game. Players are always betting on various outcomes against each other or the Banker. Many players bet on whether they will get a Full House, Three-of-a-Kind, Four-of-a-Kind, Royal Flush, or a Straight Flush. The higher the hand, the better the bonus payout. These little side bets add a layer of profit and excitement for all the players on the table. Side bets highly vary from one casino to another, so ensure that you check their rules and guidelines before betting on such bets. A few popular side bets include:

The payout in this casino game is very simple as compared to other poker games. Players get paid 1:1 on their bet after beating the dealer’s hand. These players also have the option to earn a bonus wager while playing. Usually, the payouts are posted on the table of your Pai Gow game, but most tables show the following rates:

● Straight hand pays the lowest of 2:1 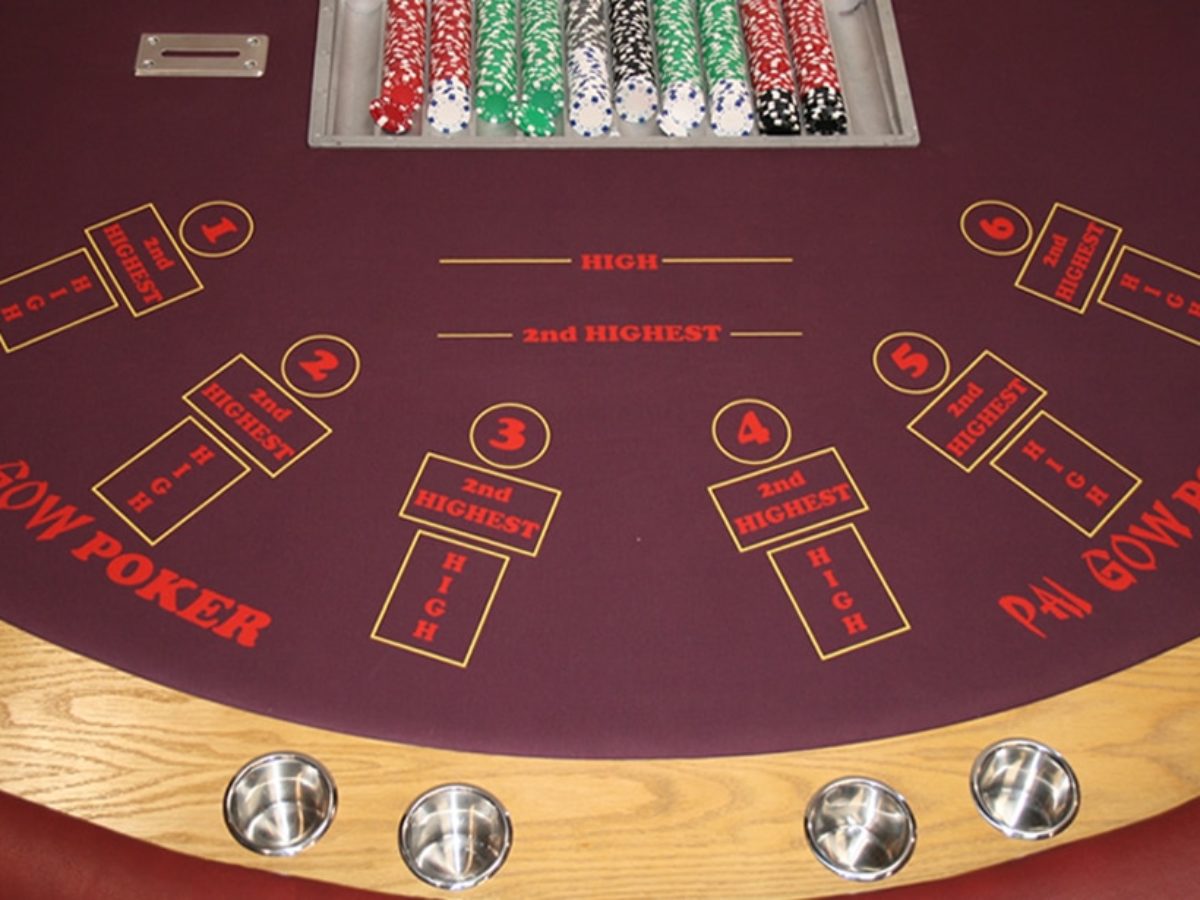 Just like all casino games, even Pai Gow has a house edge, but the percentage is comparatively low than other top-rated casino games. Generally, you will find the house edge to be somewhere around 2.84%. On top of that, when a player wins, they have to shed a 5% commission to the casinos.

Here are a few handy Pai Gow poker tips that might come in handy while increasing your chances of winning:

Bank As Much As You Can

Dispose Of Your Joker Wisely

Since the game requires you to make two hands, you have two potential sets where a Joker can fit nicely. Most players use it to complete a Flush or Straight, but pay attention as it isn’t always profitable in every scenario.

Gai Pow Envy bets are side-bets where you are betting that another player will hit a specific hand. For example, you might bet that another player from your table will hit a Flush or Straight during the round. And when any other gambler gets a hand of that same score, you automatically receive an envy bonus. These bets usually have smaller payouts, but a little is always better than nothing.

We hope our Gai Pow guide helped newbie players to understand this game with great detail. Fret not if you are still a little foggy on certain aspects. With practice and some time, you will automatically grasp all the fundamentals of Pai Gow. This is genuinely a slow-paced game that is equally entertaining, but the additional side bets make the game even more enjoyable. Lastly, after absorbing the fundamentals, you can learn and devise great strategies of your own to win.